Lightning Strike Insurance Claims & How to Prove to Your Insurance

You might think that filing a lightning strike insurance claim for property damage would be a pretty simple, straightforward process. Well, I am afraid it’s not.

Actually, filing an insurance claim for property loss resulting from a lightning strike can potentially be the most complex of claims, and your insurance company may resist covering any damage beyond fire losses.

This article aims to discuss how to file a claim for lightning damage or any damage incurred by your home or business and also how to prove to insurance that the damage is from a lightning strike.

We live in the Lightning Capital of the USA

Here is a fact about lightning in Florida you might not know. Did you know Tampa, Florida is the lightning strike capital of the US and experiences the highest number of lightning strikes each year? Here in Central Florida where our Ask An Adjuster Claims Adjusting home office is located, we experience about 90 thunderstorm days per year. The peak of the thunderstorm season is in the hottest summer months.

Afternoon thunderstorms are pretty common during the months of July and August, and often on those days we’re thankful for the break from the heat. During these summer months, Brevard County averages between four and six thousand lightning strikes per month. That’s as many as 200 strikes per day, just in Brevard County alone!

1. How to calculate the distance to a lightning strike.

Do you know how to tell how far away a lightning strike is from you? If your answer is that all you have to do is count the seconds between the flash of lightning and the clap of thunder, you’re only partly right. First, count the number of seconds between the flash and the thunder, and then divide by 5. That’s how many miles you are from the lightning strike. Those strikes are a lot closer than you thought, aren’t they?

2. Lightning can be up to ten miles long.

An average lightning channel can be anywhere between two and ten miles long. This means if you see lightning followed by thunder less than 30 seconds later, you need to get to shelter right away.

4. Lightning kills more Floridians on Wednesdays than any other day.

At any given moment there are about 2,000 thunderstorms happening worldwide.

6. Lightning can strike even when the sky above is clear.

Lightning can precede a storm by 10 miles. So just because you see dark clouds in the distance, don’t be fooled into thinking you’re safe. This is particularly important if you’re in an open area like the beach. Be safe and heed the warnings of the lifeguards.

Lightning Safety Tips for You and Your Property

As a home or business owner, your loved ones aren’t the only valuables you want to keep safe from lightning storms. Here are five tips for how to protect your family and your property from lightning damage.

Avoid electronic devices, especially those plugged into a wall, during a thunderstorm. If the time lapse between the flash of lightning and clap of thunder is less than thirty seconds, shut down and unplug your devices to avoid lightning damage.

2. Surge protectors are no match for lightning.

If you’re concerned about lightning damage to your home, consider installing a lightning protection system, which will provide safe paths for lightning to travel to the ground and protect your home from damage before it happens.

Make sure your animals have access to safe places during thunderstorms and aren’t trapped outside or somewhere they can be injured.

Do not use your swimming pool during a thunderstorm or at any time when you can see lightning and hear thunder. Use the 30-30 rule: if you hear thunder within 30 seconds of seeing lightning, take shelter. Wait 30 minutes before resuming outside activities.

Can You File a Property Insurance Claim for a Lightning Strike?

Yes. In the last three years, Floridians filed more than 250,000 insurance claims for property losses due to lightning damage resulting in more than $2.6 billion paid out on those claims.

But fire damage isn’t the only kind of damage caused by a lightning strike. Lightning can travel along electrical wiring or metal plumbing, causing damage to electronics or other household items. It Can be more difficult to find an Insurance letter for lightning damage as part of the claim. It’s possible the claims adjuster your insurance company sends will not even check for damage beyond the fire damage.

Identifying All the Damage Done by a Lightning Strike

Our public adjusters are experienced with lightning strike damage and we understand the insurance claims system, so we know exactly what to look for and how to help you get the best result from your insurance claim.

At Ask An Adjuster Claims Adjusting, we are actively serving multiple clients with property insurance claims due to damage from lightning strikes. Don’t let someone tell you what your property is worth. Call the experts today and get a FREE inspection, FREE policy review, and FREE advice.

Q. How to Determine How Far Lightning Is?

Q. Is a lightning strike covered by insurance?

Ans: Fortunately for most lightning, in general, is covered by home insurance.

Ans: If the time to hear thunder is less than 30 seconds then lightning is near enough to pose a threat. Resume outdoor activities 30 minutes after the storm ends. 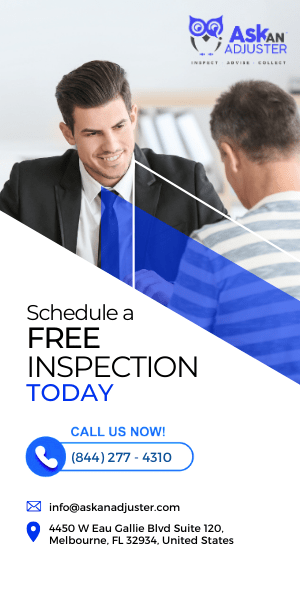