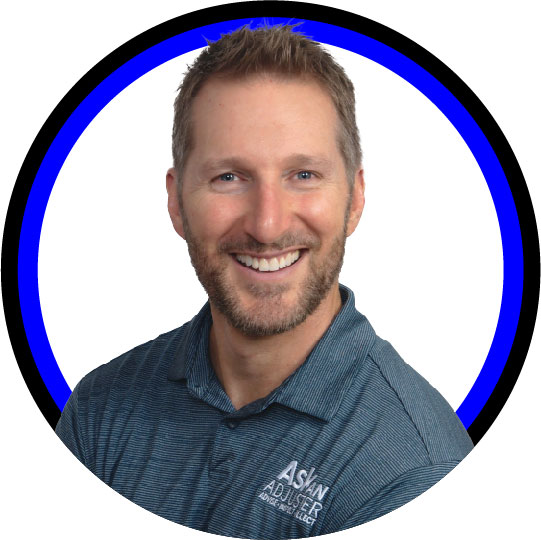 Matt was born and raised in Dayton Ohio.  He graduated from the University of Toledo with a double major in both marketing and management.  Shortly after, he moved to Tampa in 2001 where he eventually met his wife of 10 years and has two amazing daughters.

Matt began with Ask An Adjuster in 2010 as an apprentice.  After completing a 12-month apprenticeship he passed the state exam to become a licensed Public Insurance Adjuster.  With over 10 years of experience handling insurance claims for residential and commercial policy holders, he proudly holds the Commercial Lines Coverage Specialist designation.

His experience as a licensed property & casualty insurance agent taught him how the other side works.  As an agent he saw firsthand how the insurance companies operate including their policy and premium underwriting practices as well as their claims handling strategies.   He gained two years of experience working directly for a large, on-site property management group that managed a 5,000-unit condominium.  He led the claims handling division and worked closely with the association and the board of directors.

Matt is currently a state licensed Public Adjuster appointed through the Department of Financial Services.   As a licensed PA, Matt consults, strategizes and advises policyholders including residential, property management companies, CAM’s, and contractors to adjust the claim to the maximum benefit of the policyholder.  He specializes in roof damage claims and water loss claims.  He has extensive experience properly handling mold concerns, remediation, and mitigation efforts.

Schedule a FREE 11-Point Inspection with me below!

"Ask an Adjuster did a great job of helping me with my leaking roof and the claims that had to be filed with my insurance. Specifically, Matt Rhead is PHENOMENAL and went to bat for me in every way possible. The entire process was so easy for ME - which is the whole goal behind Matt's work. I really had almost zero involvement, which saved me a tremendous amount of time, and certainly alleviated any stress I was originally experiencing. I would highly recommend Matt to ANYONE needing help with insurance claims or issues, and have already. He is extremely professional, knowledgeable, patient, organized, responsive and overall, a life saver for me. There were many things that I never would have even known were issues, had he not gotten involved. I am so very grateful and my new roof is solid and looks amazing! Thank you so much Matt - I appreciate you more than you can ever know!"